There are sometimes when a thread of a past experience finds itself unraveled in the present. That’s how it feels when I listen to some songs. For instance, the song that DJ Alle Farben redid titled “The Night We Met,” which originally was written by Lord Huron and written by Ben Schneider. 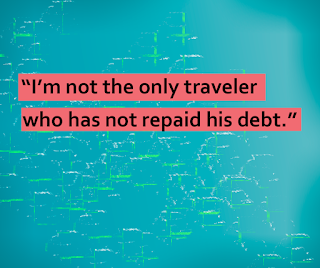 The opening lines of the song strike hard: “I’m not the only traveler who has not repaid his debt.”

Truer words never spoken. I think theologically we all walk around with a debt. It’s never spoken about in the biblical witness. It’s definitely not clear in the things we say such as “the crucifixion is salvation” or “baptism is the mark of salvation”.

What debt was so bad, so very bad that we created a debt that Our God had to die at our hands? What are these misdeeds that we do that we continue to incur a debt? Are they really as easy as:


Are we really just travelers passing through and can’t make that kind of difference to this world? I honestly think why not? Why not just be a traveler that passes by and tries to do things for a change in this world. Why can’t the mark of salvation be that we are created in God’s image to seek justice, love kindness, and be humbly God’s good creation?

“When is it ever going to end?” I ask myself more as a person, why can’t I just say: No. It stops here. My last post talked a little bit about things I want to end or affect. I don’t seek to create change because of my ego or id. I have a big enough ego that makes me question my low self-esteem issues. I want to change things because enough is enough.